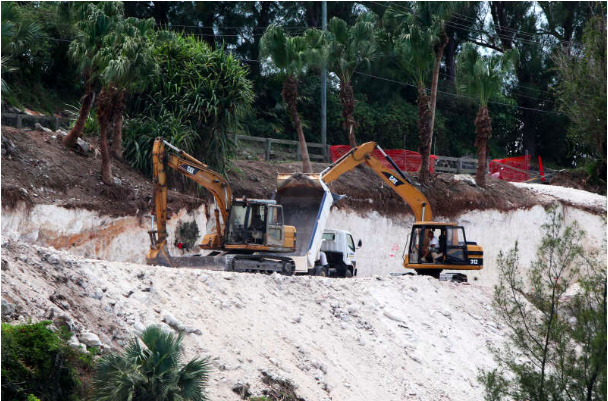 The “desecration” of Bermuda’s environment will continue unless there is a huge public outcry to stop development of green spaces, according to the Bermuda National Trust.

The comments came after work started to clear a site on Harrington Sound Road for a four-bedroom house on an area that used to be protected as coastal reserve.

The site, overlooking Harrington Sound near Shark Hole in Hamilton Parish, was re-zoned as residential through the Tucker’s Point special development order more than ten years ago.

Karen Border, executive director of the Bermuda National Trust, said: “The development of a four-bedroom house and pool on the very narrow strip of land between the road and Harrington Sound at Shark Hole is a prime example of the environmental damage that can arise from SDOs.

“The SDO removed those protections and 11 years later we see the result.”

Ms Border said that the BNT and others objected to the project, but the development was approved by the Department of Planning.

“Until there is a loud enough outcry from the Bermuda public as a whole that will sway decision-makers to rule against such developments, we are likely to keep on seeing the desecration of Bermuda’s remaining open spaces,” she said.

Ms Border said the BNT and other local environmental organisations are now keeping a close eye on the potential SDO for the Fairmont Southampton site.

A 2009 SDO for the Fairmont Southampton gave planning permission in principle for 130 fractional tourism and residential units. However, the developer, Gencom, has said it intended to propose amendments to that SDO to support investment in the hotel.

A spokeswoman for the Bermuda Environmental Sustainability Taskforce said the charity had fought against the Tucker’s Point SDO, which it described as a bailout rather than an effort to revive a tourism facility.

“It was a real estate deal for the exclusive benefit of its investors at Bermuda’s expense. I suppose one could say it was another type of land grab,” the spokeswoman said.

“The 2011 Tucker’s Point SDO gave them permission to build private residences on valuable and protected open (green) space — development that has or will be sold off mostly if not entirely to non-Bermudians.”

She added that the charity was very concerned about plans for the Fairmont Southampton and what it could mean for undeveloped land at the site.

“I think they call it branded residential properties. Again, not a tourism project as much as another real estate sales arrangement,” the spokeswoman said.

“Since Gencom is the common factor in both the Tucker’s Point and Fairmont Southampton deals, before any consideration of an SDO is given, we would expect our parliamentarians, and fellow Bermudians, to demand economic information about the Tucker’s Point ‘model’ to help to prove the actual value of these types of developments to Bermuda.”

She added: “If a new or amended SDO is requested that proposes expanded residential development at the Fairmont Southampton, it is likely that BEST will ask for the community to oppose that.

Previous: Have a reusable Cup Match
Next: Charity warns of ‘piecemeal destruction of protected open spaces’