To preserve and enhance the quality of life in Bermuda for present and future generations by engaging with the community to advocate for sustainable management and development of the physical, social and economic environments.

Please note: BEST has an interest in fostering orderly and appropriate development, particularly where the development is of large scale with a significant environmental impact. For example, BEST believes that the expansion of the tourism industry should be orderly and measured against a comprehensive plan. Please see the Bermuda National Tourism Plan here: https://www.gotobermuda.com/sites/default/files/bermuda-national-tourism-master-plan.pdf

If you would like to join BEST, or if you have any questions, or comments please contact us.

The Bermuda Environmental Sustainability Taskforce, or BEST, is an environmental advocacy organisation that works primarily to preserve and protect Bermuda’s dwindling open spaces.

The idea first took shape in 2006 when a small group of people banded together to save Bermuda’s Botanical Gardens from being built on — at the time, the new hospital was being designed to consume about one-third of the Gardens. We realised that there wasn’t anyone who was looking out for the broader community’s interest when big development projects were being planned. So when, in 2007, the 37 acre and nearly pristine Southlands property was threatened with obliteration by a glass and concrete hotel, we changed our name from “Save the Gardens” to “Save South Shore” and then to “BEST”.

BEST has one consultant staff-person. While our mission includes social and economic factors, our dominant focus is on the physical environment. We scrutinise the weekly gazetting of planning applications and screen them to gauge our response. Our attention is triggered if conservation-zoned lands are involved or if the development has a significant environmental impact.

We aren’t content to only react to planned developments. We work also to influence policy, for example, through our contributions to the Bermuda Plan and the City of Hamilton Plan; our publication of the “Blueprint for Environmental Sustainability”; and our efforts to make the application vetting process more user-friendly for ordinary citizens. We have found the staff at the Department of Planning increasingly willing to assist our inquiries and open to our suggestions for changes in procedure when appropriate.

Our approach varies depending on the issue, usually ranging from no response, to a letter of objection, to involving the community in an awareness and activist campaign. We have produced informational videos for TV and the internet, held walks through threatened areas, hosted concerts, launched and delivered petitions, researched and published position papers, produced and distributed media releases, held press conferences and put on workshops. On four occasions we have gone before Bermuda’s Supreme Court, all successfully, to gain legal force for our stance.

In April 2014 a public BEE Fair was triggered by concerns about declines in bee populations, globally and locally. The Fair featured a variety of exhibitors, vendors, films, children’s activities, and a panel discussion centered on local bee-keeping issues. The children’s art and poetry competition produced delightful and thought-provoking interpretations of the life of bees.

Attendance at the event was encouraging, as was radio and TV station VSB’s declaration of April as Environmental Awareness Month — purely coincidental but so very timely as several of the Fair’s organising team and BEST boosters were interviewed during the month.

More and more frequently we are called on by members of the public to assist them with Planning issues. We are usually able to help, by steering them to the right government agency, suggesting approaches to their problem, putting them in touch with others who share their issue(s) and providing meeting space and logistical support.

The success BEST has experienced is due mainly to the wealth of innovation and energy we are gifted by the volunteers who give of their time as members and leaders of our issue groups, Management Team and Board of Directors. We are also grateful for the donors who pitch in to help defray our very modest operating expenses.

Our most diverse volunteer spread is by age, from high-school students to an octogenarian. We are fortunate to have attracted college students as interns during the summers who have taken on mini-research projects such as the histories of Southlands and of the Pembroke Marsh project to parkland.

Equally diverse are our current projects:

A measure of the effect of Bermuda’s environmental organisations is the heightened awareness among youth and adults of the importance to protect and improve the health of Bermuda’s land and marine environments. That’s good news. Even better news is that environmental issues are more often in the news these days. Issues of sustainability are raised more often in casual conversations, in policy discussions among leaders in business and politics, in educational discourses in our schools. Most significantly, any consideration these days of major development projects almost automatically includes EIAs. That’s just about the best news for us.

A celebration of the life of Stuart Jackson Hayward was held at the Riddell’s Bay Gardens on Saturday, September 3rd, 2022 where friends and colleagues gathered to remember a man who had a fierce dedication in his quest to hold back the surge of development in his beloved homeland, Bermuda, and to preserve the quality of life on the island. Please enjoy this video and hear his friends recall what Stuart meant to them.

A poem by George Linneus Banks entitled ‘What I Live For’ reflects Stuart’s life and work:

“For the cause that lacks assistance,

the wrong that needs resistance,

for the future in the distance,

and the good that I can do.”

Stuart was a founder of the Bermuda Environmental Sustainability Taskforce (BEST) and led the organisation as its Chief Advocacy Officer for over a decade. He was the BEST backbone that helped us to stand up and be seen; to take knocks and remain standing.

He left us a few, wise guiding principles to help us:

Speak without being offensive

Listen without being defensive

Disagree without being disagreeable

If the test of a good life is that people are changed by knowing you, Stuart passed that test with ease. He can now rest in peace but he will be missed.

In further remembrance of Stuart, in 2023 dedicated funds will be made available for short, paid internships for candidates who have graduated from an environmental-type programme. BEST will engage a successful candidate for a period of 6 – 8 weeks to assist with research for a variety of BEST projects, while they make contacts in the environmental space and gain experience that might benefit their employment possibilities.  More details will follow in the New Year.

The following were distilled from a long list of accomplishments over our first 10 years of BEST:

Saved Southlands: In 2005 a group of businessmen purchased the Southlands Estate, a unique, natural area, with a plan to build a 5 star luxury hotel. BEST launched a series of actions intended to alert and motivate the public, which included production of a video(Protecting the South Shore) and direct action (the Tunnel Vigil, and the Walk through the area) that attracted hundreds of participants. The huge public outcry against spoiling such awonderful natural area, hardly existing any longer in Bermuda, led in 2010 to the Government making a land swap of Southlands for Morgan’s Point. As a result, Southlands will remain in its natural state and is intended as parkland for the community.

Protection of agricultural land in Bermuda through submissions to the 2008 Bermuda Plan and being co-sponsor of Aran McKittrick’s paper on The Role of Agriculture in Bermuda’sFuture. It is worth noting that the 2008 Plan Tribunal made a special mention of BEST’s

efforts: “The majority of counter objections were received from environmental groups such as Bermuda Environmental & Sustainability Taskforce (BEST). BEST submitted the lion’sshare of these objections. Such objections were primarily lodged against those landowners who proposed amendments to agricultural land, albeit BEST also objected to the reduction and removal of woodland, open space and coastal areas. The Tribunal would like to applaud BEST for its hard work. Much time and effort by the group went into investigation and advertised objection. Such efforts certainly demonstrate the group’s sincere commitment to safeguarding those environmentally sensitive areas around the Island for future generations of Bermudians.” Excerpt from Introduction to the Report of the Draft Bermuda Plan 2008 Tribunal

Saved Warwick Long Bay from beach development. This effort included engagement with the neighbours that generated a petition and a Judicial Review in the Supreme Court thatreversed the Cabinet Minister’s decision, thereby disallowing the development (beach bar). Since 2016, BEST has pushed to have the Bermuda Tourism Authority and Government keep to their commitment to limit beach development to the 5 agreed-upon beaches

(Horseshoe Bay, John Smith’s Bay, Shelly Bay Beach, Clearwater Beach and Tobacco Bay) while keeping others pristine for the benefit of survey respondents who expressed interest in non-development as an option for Bermuda beaches.

The production of position papers such as “The Blueprint for Environmental Sustainability” (2012) and “The Gamble of Gaming” (2013). We have produced and published these highly researched and documented papers, alongside a further five, adding substance to the public discourse on relevant community issues. Our careful research and non-partisan presentation have made these welcome additions to the public stock of accessible, informative resources.

Protective Costs Orders. In our Court case against the Tuckers Point development, BEST introduced (to Bermuda), argued and won a precedent-setting judgement that acknowledged our action as in the public interest and for that reason shielded us from financial liability for most of the court costs. BEST has been awarded a PCO in all our cases since then.

Saved South Basin/Cross Island from becoming an industrial-like threat to a high-value marine area was the outcome of a successful case against WEDCO for an inadequate Environmental Impact Assessment (EIA) of the end-uses for the new Cross Island reclaimed land. In their planning for what use they would make of the 9 acre landfill, WEdCo hired consultants whose EIA was deficient in that, among other flaws, it would have enabled WEdCo to engage in environmentally ruinous industrial-grade activities adjacent to a highly sensitive and near-pristine marine zone. BEST put the issue to the Supreme Court, which quashed the permission for the industrial uses of Cross Island once the America’s Cup tenants had left the site.

Increased interaction with the community around environmental issues of concern to them. Examples include:

• The formation and work of The BUZZ which started by looking at the influences on the die-off of honey bees and is now pressuring Government to reduce or eliminate the use of pesticides in Bermuda and for the remediation of food-growing soil.

• Research into the social and economic impacts of derelict buildings.

• Reports on policies and/or perceived irregularities in the planning process.

Ongoing Planning Review Process monitoring the weekly lists of planning applications (since 2012) to identify, comment on and, if necessary object to proposed development that would impact protectively-zoned land. This process dovetails with BEST’s current efforts to contribute to the formal review being done for the 2017 Bermuda Plan.

Earned respect from the media as the “go to” organisation for environmental concerns. While there are several NGOs who deal with environmental issues, BEST has developed a reputation for delivering reliable and timely responses to requests for information or comments.

Development and launch of the award-winning BEST website which serves as a vital resource for the community in tracking environmental issues. One aspect thought to be especially useful is the Environmental Issue Resource Guide: https://best.org.bm/resources. 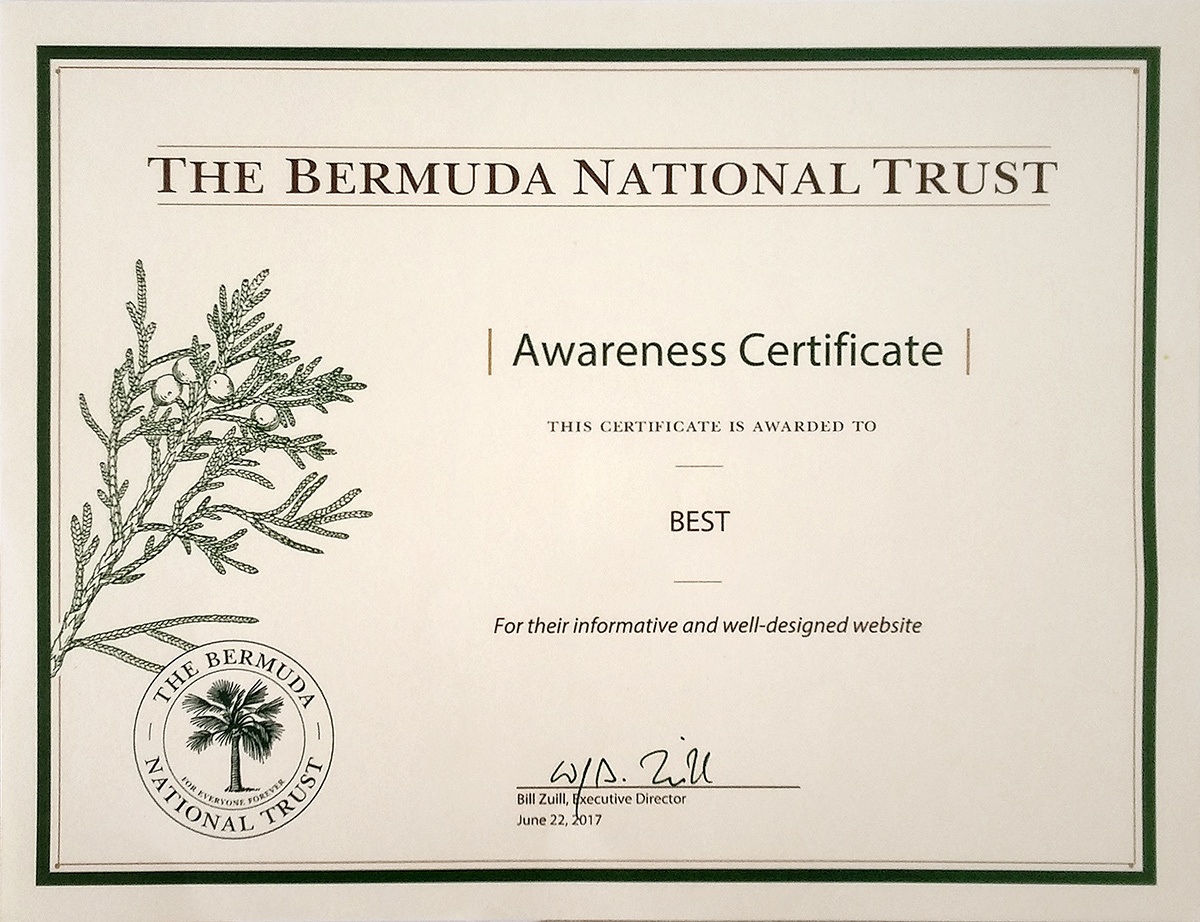 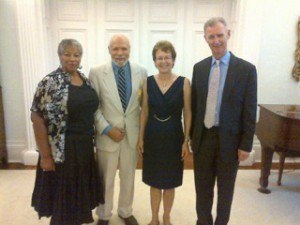 Stuart Hayward, President and Chief Advocacy Officer of BEST — shown here with his sister Sylvia Hayward-Harris (left), his wife Dr. Jamie Bacon (right) and Governor George Fergusson (far right)— was honoured to receive the Queen’s Certificate and Badge of Honour for a lifetime of service to the community, especially for services to the preservation of Bermuda’s natural environment. June 2015 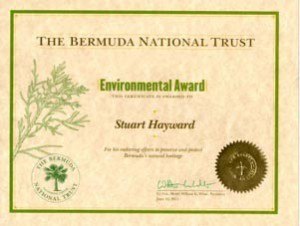 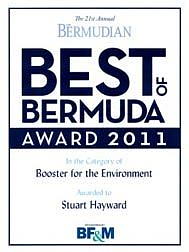 Best of Bermuda Award 2011: Booster for the environment (Stuart Hayward)