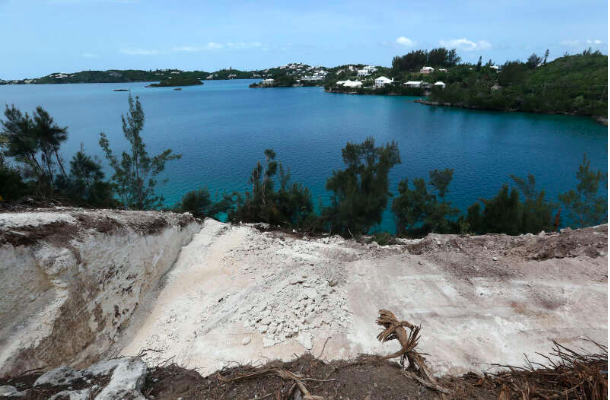 A “stop work” order has been placed on a controversial project to clear an area of Harrington Sound Road that was once protected as coastal reserve.

A spokesman for the Ministry of Home Affairs confirmed that the “stop work” order was signed at the Shark Hole site in Hamilton Parish on July 22 owing to specific criteria under the Building Act 1988 23B (2) not being met.

The issue is under “active investigation” and the works – the development of a four-bedroom house and pool – will be halted pending the outcome of the investigation.

The spokesman said: “Work stopped when the owner, agent and contractor were aware of the notice.

“Concerning advising of the criteria not met, as these site issues are still under active investigation, we cannot conclusively confirm this.”

Kim Smith, the executive director of the Bermuda Environmental Sustainability Taskforce, said that she did not know the basis for the stop order but added that the organisation had questioned the Department of Planning about why there did not appear to be the required building permit number posted on the site.

BEST also shared a photograph with the department it had been sent that appeared to show evidence of either a “cave or void“.

The home affairs ministry spokesman said: “The ministry can advise that the building inspector would have confirmed that the permit sign was posted to commence work.

“Should any failures in meeting any criteria be identified, the Development and Planning Act and the Building Act have many actions that may be taken. However, as the site is still under active investigation, no decisions have been made.

Previous: Appeal launched for Stuart Hayward scholarship Owain Johnston-Barnes
Next: Tributes paid to Stuart Hayward, ‘a man for all seasons’