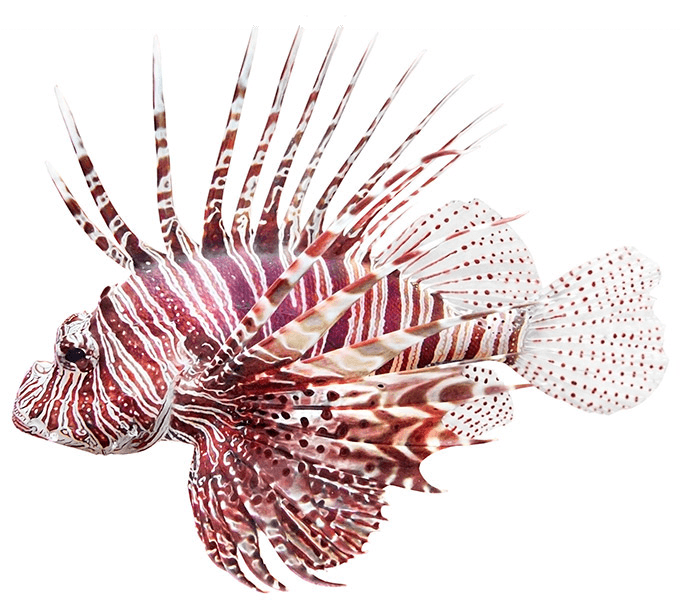 11th Hour Racing is developing a project to raise awareness about the global issue of invasive species. With Bermuda hosting the 35th America’s Cup, we are focused on lionfish.
Why lionfish? They are wreaking havoc on reefs in Bermuda and throughout the Western Atlantic from Rhode Island to Venezuela. Lionfish devour the herbivore fish that are responsible for eating algae that hinder the growth of corals, and reefs eventually are smothered and die. Coral reefs are natural breakwaters, acting as buffers against waves from storms and hurricanes – a recent study estimated that reefs in Bermuda dissipate 75-85 percent of wave energy; this is particularly important since the island is almost entirely comprised of wind-blown sand dunes cemented into limestone rock, and is susceptible to erosion from wave action. Coral reefs also provide economic benefits, supporting the tourism industry as well as commercial and recreational fisheries; the Total Economic Value (TEV) for Bermuda’s reefs represents 10-17 percent of Bermuda’s GDP (source: Living Reefs Foundation).

Through the platform of the 2017 America’s Cup in Bermuda, 11th Hour Racing is committed to raise awareness about the global issue of invasive species and created a celebrity chef culinary event, the #EatLionfish Chefs’ Throwdown focused on lionfish as a sustainable and delectable seafood choice. All the America’s Cup teams are participating in the event and are collaborating to its success, with the goal of increasing market demand for lionfish and promoting the development of a sustainable fishing industry in Bermuda. This event will take place on 19 April 2017 shortly before Earth Day.