In response to question from the media regarding a recent landslide at Southlands, Stuart Hayward issued the following:

We weren’t aware of this particular slide. The coastline along a considerable stretch of our south shore is vulnerable to erosion, a vulnerability that is amplified during bouts of heavy rainfall and/or heavy wind and wave action. We can expect wave-related erosion to increase along with rising ocean levels, whether the rise is due to localised events such as the recent warm-water eddy spun off from the Gulf Stream or due to macro events associated with climate change (mainly from melting glacial- and polar-ice and thermal expansion of ocean water). Heightened acidity of ocean- and rain-water, linked to elevated levels of atmospheric carbon dioxide, along with increased intensity of rain and ocean events will predictably add to overall erosion — coastal and in-land.

Opinions differ about prevention, ranging from big-picture preventative (reducing human output of the “greenhouse gases), to localised building of break-waters and schemes to harden areas of substrate and boost their resistance to erosion.

This event does remind us of the long-overdue induction of Southlands into the national parks system. We were told the hold-up was a management plan for the park but I understand that the management plan has been completed so there should be no obstacle to a timely  formalising of Southlands as a park. The public saved Southlands from development and deserves to see the park protected from future development schemes. Remedial work on the Southlands coastline, as well as within the parkland to buildings and vegetation is likely to be limited while Southlands remains in limbo. 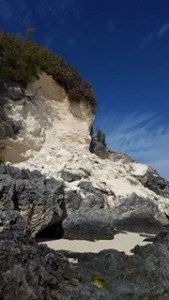