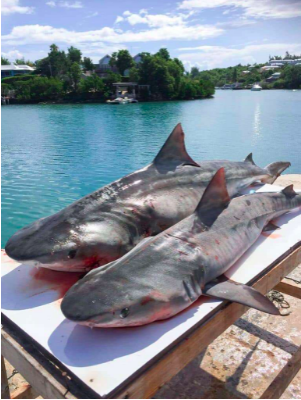 A call for vulnerable sharks to be spared from fishing came from an environmentalist after pictures circulated via social media showed two dead tiger sharks aboard an unidentified boat.

Tiger sharks are not only under threat, but crucial to the health of the sea – and inedible, according to William Welton.

Mr Welton, chief operating officer at the Bermuda Institute of Ocean Sciences, said yesterday that he was speaking in a personal rather than official capacity.

He added there were quiet efforts under way by conservationists to have sharks afforded some protection from fishing, as their population around Bermuda was under threat.

“When the water gets this warm, it’s prime time for seeing tiger sharks,” he said. “This is a time when we should recognise they are very vulnerable and that, pending larger protection, we should just leave them alone.

“If you accidentally hook one, just let it go.”

Mr Welton said there was a dearth of hard science on the extent to which local shark populations were threatened.

“There’s a general feeling that it’s very plausibly from overfishing,” he said, pointing to heavy and “completely unsustainable” fishing of juvenile sharks as recently as the 1990s.

“Sharks are very slow breeders. They can’t take that kind of hammering. The strong suspicion is that we have almost extirpated sharks on the Bermuda platform – I think they have been wiped out near shore.”

Judging from the size of the fish in the pictures online, Mr Welton said one at least might have had shark pups inside.